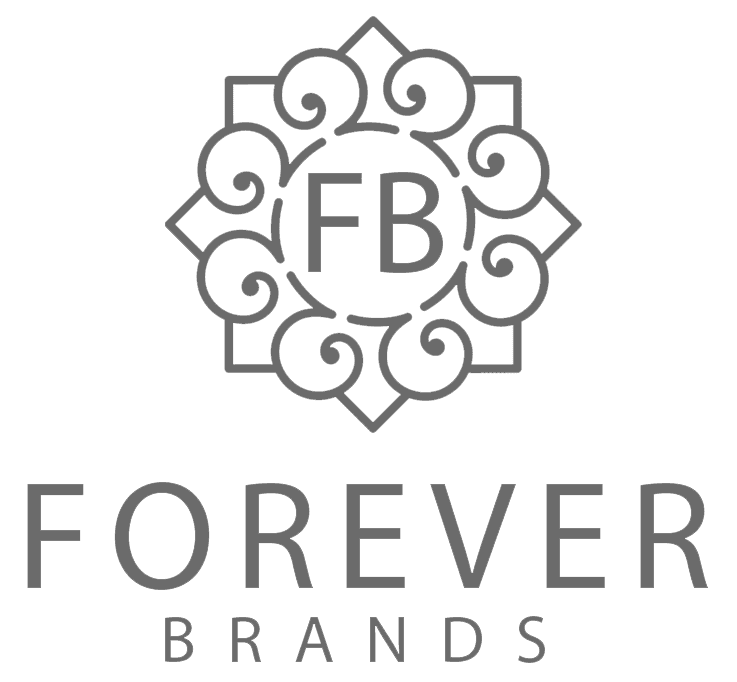 To create a fine Swiss timepiece, a number of components must be designed, created and assembled by a team of highly skilled watchmakers. Each watch model (or reference) will have different look and will possess unique functions so it must be crafted with different components. The watch diagram below outlines the basic elements in fine watches to build a basic understanding of their technical makeup. Understanding the anatomy of luxury watches will help in selecting the style of Swiss watch best fit for you. 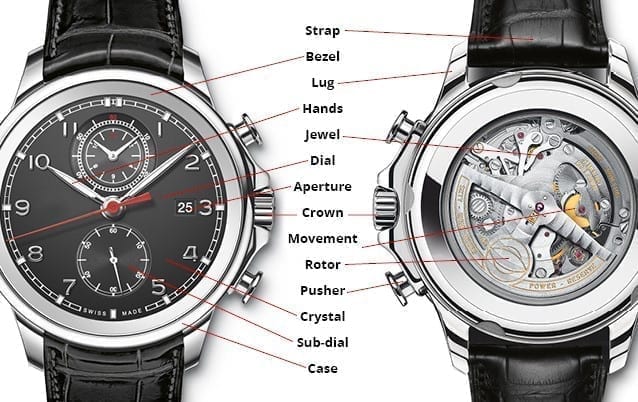 A small opening (also called a “window”) in the dial that displays certain information such as the date, day, month or moon-phase.

Usually made of metal, the bezel is a ring around the crystal on the top portion of a watch that holds the glass or crystal in place.

The container that protects the watch movement. Cases are available in many shapes such as round, square, oval, tonneau and rectangular.

A button on the outside of the watch case used to set the time and calendar. On mechanical watches, it is also used to wind the mainspring.

Made of glass, plastic or synthetic Sapphire, the crystal is a transparent cover that protects the watch dial and reduces glare.

A plate, with a metal base and visible through a crystal, that carries certain indication, such as the hours, minutes and sometimes seconds.

Indicators that move over the dial to point at the hour, minute or second. Watches generally have three hands to show the hours, minutes and seconds.

Small Sapphires or Rubies, located on the movement, that reduce friction by acting as bearings for gears in a mechanical watch.

Sometimes referred to as horns, lugs are projections on the watch case that are used to secure the strap or bracelet to the watch case.

Acting like an engine, a movement is the inner mechanism of a watch that keeps time and powers the watch’s functions.

Button(s) located outside of the case that control specific functions of the watch. Pushers are most commonly found on watches with a chronograph.

Attached to the watch movement, the rotor rotates freely to wind the mainspring and store power in automatic timepieces.

A strip or band of leather or rubber that holds the watch to the wrist. It must be non-metal to be considered a strap; a metal version is a bracelet.

A small dial placed inside the main dial on a watch’s dial that give information not provided by the main watch dial such as a chronograph.

A watch movement (also known as a “calibre”) is the engine of a watch that acts as the powerhouse to make the watch and its functions work. This internal mechanism inside the timepiece moves the hands and powers any complications such as a chronograph, annual calendar or a dual time zone. Driving all of the timekeeping functions, the movement is the essential component in a watch and keeping accurate time; a watch would not function without it.

There are countless different movements that are created by watch manufactures utilizing proprietary innovations, but each of these movements will fall into one of two categories—quartz or mechanical.

Quartz movements are very accurate and require minimal maintenance aside from battery replacements. They tend to be low cost since they are battery powered and have few moving parts. Quartz watches aren’t as desirable to most watch enthusiasts because they lack the technical craftsmanship and engineering that mechanical timepieces have. Quartz movements in fine Swiss watch brands, such as Patek Philippe, are designed to comply with their strict quality standards. 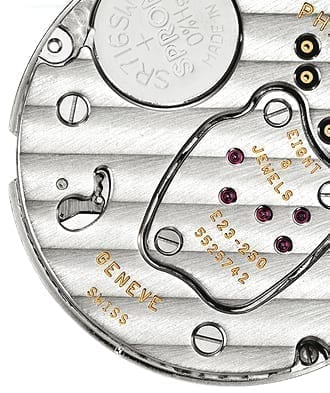 HOW A QUARTZ MOVEMENT WORKS:

A quartz movement utilizes a battery as its primary power source and is typically the type of movement that you will find in your standard, no frills watch. To create power in quartz watch movements, a battery sends an electrical current through a small quartz crystal, electrifying the crystal to create vibrations. These vibrations keep the movement oscillating and drive the motor to move the watch hands.

Mechanical movements are often chosen over quartz movements for luxury watches because of the level of quality and craftsmanship of mechanical movements. Skillfully created by expert watchmakers, these movements contain an intricate series of tiny components working together to power the timepiece. Although the general design of mechanical watches hasn’t changed much in centuries, technology has allowed for more precise engineering and a greater attention-to-detail. 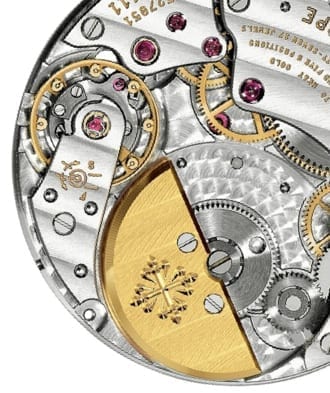 HOW A MECHANICAL MOVEMENT WORKS:

Unlike quartz movements, a mechanical movement uses energy from a wound spring, rather than a battery, to power the watch. This spring stores energy and transfers it through a series of gears and springs, regulating the release of energy to power the watch

Considered to be the most traditional movement, manual movements are the oldest type of watch movement. Manual-wind watches that we carry are often loved for their beautiful display of the watch movement, which can usually be seen through the case-back. These movements are often referred to as “hand-wound movements” because they have to be manually wound by hand to create energy in the watch’s mainspring

HOW A MANUAL MOVEMENT WORKS:

The wearer must turn the crown multiple times to wind the mainspring and store potential energy. The mainspring will unwind slowly and release energy through a series of gears and springs that regulate the release of energy. This energy is then transferred to turn the watch hands and power the watch’s complications.

Winding intervals for manual-wind watches will depend on the power reserve capacity of the movement, which could be 24 hours to five days or more. Some watches will require daily winding while others like the Panerai Luminor 1950 GMT, which has an eight day power reserve, only needs to be wound approximately every eight days. Many manual wind watch owners are simply in the habit of winding their watch before they put it on.

Considered to be the most traditional movement, manual movements are the oldest type of watch movement. Manual-wind watches that we carry are often loved for their beautiful display of the watch movement, which can usually be seen through the case-back. These movements are often referred to as “hand-wound movements” because they have to be manually wound by hand to create energy in the watch’s mainspring.

HOW AN AUTOMATIC MOVEMENT WORKS:

An automatic movement works largely the same way that manual movements do, with the addition of a metal weight called a rotor. The rotor is connected to the movement and it can rotate freely. With each movement of the wrist, the rotor spins, transferring energy and automatically winding the mainspring.

Watches featuring an automatic movement will still require winding, but dramatically less than a manual watch. If the watch is worn every day, it will maintain timekeeping functions without winding; but if the watch hasn’t been worn for an extended period of time, it will need a quick wind to garner initial power. A great alternative to hand winding automatic watches is to use a watch winder, which will keep the watch fully wound when it’s not being worn.

Home
Forever Hers
Forever His
Custom Jewelry
Contact Us

This website uses cookies to improve your experience while you navigate through the website. Out of these, the cookies that are categorized as necessary are stored on your browser as they are essential for the working of basic functionalities of the website. We also use third-party cookies that help us analyze and understand how you use this website. These cookies will be stored in your browser only with your consent. You also have the option to opt-out of these cookies. But opting out of some of these cookies may affect your browsing experience.
Necessary Always Enabled
Necessary cookies are absolutely essential for the website to function properly. These cookies ensure basic functionalities and security features of the website, anonymously.
Functional
Functional cookies help to perform certain functionalities like sharing the content of the website on social media platforms, collect feedbacks, and other third-party features.
Performance
Performance cookies are used to understand and analyze the key performance indexes of the website which helps in delivering a better user experience for the visitors.
Analytics
Analytical cookies are used to understand how visitors interact with the website. These cookies help provide information on metrics the number of visitors, bounce rate, traffic source, etc.
Advertisement
Advertisement cookies are used to provide visitors with relevant ads and marketing campaigns. These cookies track visitors across websites and collect information to provide customized ads.
Others
Other uncategorized cookies are those that are being analyzed and have not been classified into a category as yet.
SAVE & ACCEPT 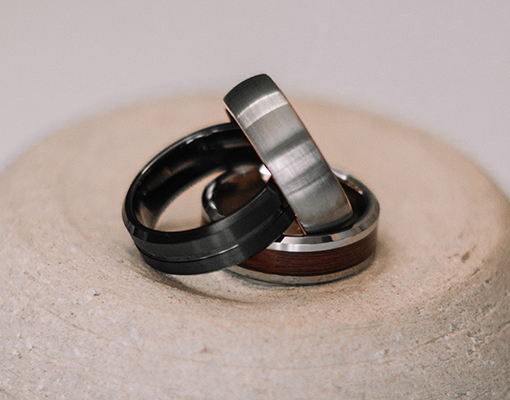 Get R750 worth of Coupons